Radon is a chemical element with the symbol Rn and atomic number 86. The last member of the noble gas family makes up Group 18 of the periodic table. It is naturally occurring from the decay of Uranium, Thorium, and Radium decay. Continue reading to learn more about radon.

Radon is chemically inactive, so it does not interact with any other element; therefore, it does not cling or attach to dust, filters, or other materials. It has a half-life of 3.8 days and continues to decay and release alpha and beta radiation until it turns into the stable element of Lead (206), which is not radioactive and does not decay. Most of its radioactive activity happens within minutes of its decay.

Radon is everywhere on Earth, and testing is the ONLY WAY TO KNOW if you are being exposed to dangerous levels.

It is essential to test AIR and WATER every 2 YEARS, regardless of initial results and the presence of a mitigation system. Impact of Decaying Radon and its Daughters

Elements created in the decaying process between Radon222 and Lead 206 are called Radon daughters, or as scientists like to call them, progeny. During each element decay, alpha and beta radiation are released.

The alpha particle is the "heaviest" type of particle there is. Due to its size can only travel a few centimeters in the air, and a sheet of paper can stop it.

Alpha radiation is dangerous when ingested or inhaled. When this happens, it brings the radioisotope close enough to sensitive live tissue for the alpha radiation to damage cells. Per unit of energy, alpha particles are at least 20 times more effective at cell damage than gamma rays and X-rays.

In summary, radon decay releases alpha and beta particles that can damage live tissue when inhaled and swallowed. 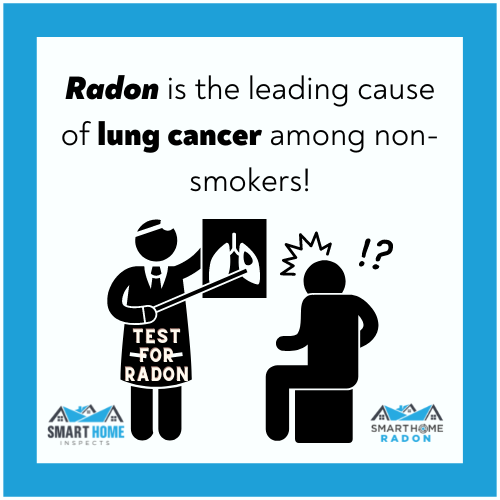 What does it cause?

Radon is a known carcinogen. It is estimated to cause about 21,000 lung cancer deaths yearly in the United States. Radon exposure is the leading cause of lung cancer among non-smokers.

"Some studies have suggested that radon exposure may be linked to other types of cancer as well, such as childhood leukemia. But the evidence for such links has been mixed and not nearly as strong as it is for lung cancer. Because radon and its progeny are absorbed mainly by inhaling, and because the radiation they give off travels only a short distance, it is unlikely that radon would affect other tissues in the body." [american cancer society]

Currently, there are several studies underway to understand more about radon exposure.